This database is an every name index to individuals enumerated in the 1920 United States Federal Census, the Fourteenth Census of the United States. In addition, the names of those listed on the population schedule are linked to actual images of the 1920 Federal Census, copied from the National Archives and Records Administration microfilm, T625, 2,076 rolls. (If you do not initially find the name on the page that you are linked to, try a few pages forward or backward, as sometimes different pages had the same page number.)

What Areas are Included:

The 1920 census includes all fifty U.S. states and territories, as well as Military and Naval Forces, the Virgin Islands, Puerto Rico, and for the first time American Samoa, Guam, and the Panama Canal Zone.

Why Census Records are Important:

Few, if any, records reveal as many details about individuals and families as do the U.S. federal censuses. The population schedules are successive "snapshots" of Americans that depict where and how they were living at particular periods in the past. Because of this, the census is often the best starting point for genealogical research after home sources have been exhausted.

The following questions were asked by enumerators:

Due to boundary modifications in Europe resulting from World War I, some individuals were uncertain about how to identify their national origin. Enumerators were instructed to spell out the name of the city, state, province, or region of respondents who declared that they or their parents had been born in Germany, Austria-Hungary, Russia, or Turkey. Interpretation of the birthplace varied from one enumerator to another. Some failed to identify specific birthplaces within those named countries, and others provided an exact birthplace in countries not designated in the instructions.

Provided in association with National Archives and Records Administration
This is a census of the U.S. population as of 01 January 1920. Learn where your ancestors lived, who lived in the household, ages, places of birth, occupation, immigration and naturalization facts and more. 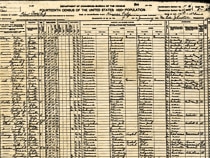 The 1930 Census contains records for approximately 123 million Americans. The census gives us a glimpse into the lives of Americans in 1930, and contains information about a household’s family members and occupants including: birthplaces, occupations, immigration, citizenship, and military service. The names of those listed in the census are linked to actual images of the 1930 Census.

This database is an index to the head of households enumerated in the 1910 United States Federal Census, the Thirteenth Census of the United States. In addition, each indexed name is linked to actual images of the 1910 Federal Census. The information recorded in the census includes: name, relationship to head of family, age at last birthday, sex, color or race, whether single, married, widowed, or divorced, birthplace, birthplace of father and mother, and more.

This database is an index to individuals enumerated in the 1900 United States Federal Census, the Twelfth Census of the United States. Census takers recorded many details including each person's name, address, relationship to the head of household, color or race, sex, month and year of birth, age at last birthday, marital status, number of years married, the total number of children born of the mother, the number of those children living, birthplace, birthplace of father and mother, if the individual was foreign born, the year of immigration and the number of years in the United States, the citizenship status of foreign-born individuals over age twenty-one, occupation, and more. Additionally, the names of those listed on the population schedule are linked to actual images of the 1900 Federal Census.