Brucie's journey of discovery began with his very own letter from America. He received a note from a Linda Monday in Atlanta who believed her ex-husband was related to him, suggesting that their shared great-grandfather, Joseph Forsyth Johnson, may have been a bigamist.

The Strictly Come Dancing host's first visit was to a family historian cousin, who gave him some clues about Joseph's life. These included a marriage certificate to Elizabeth Trowsdale, evidence of six children and a diary written by Joseph's daughter, Christina. However, the real Brucie Bonus was a business card, showing that his ancestor was a successful landscape gardener, and revealing many of his positions.

TOP TIP
Follow your ancestors' journeys
Passenger lists are a great way to trace your ancestors' movements, and later examples include details such as hometowns, other family members and even physical descriptions. We have an exclusive set of lists for journeys into the UK from 1878 to 1960.

Bruce followed his forebear's career through Belfast to London, where a trade directory listed him at an upmarket Bond Street shop. However, it was here that the TV star received his first shock – the 1881 and 1891 Censuses showed Joseph's family weren't with him, and were living a far less privileged life. Research in passenger lists soon showed the reason why – the scoundrel had run off to New York in 1885, with a woman 20 years his junior, listed as his wife!

Naturally, Bruce set off for the States. Here, he found no evidence of a marriage to the younger woman, named Francis Clarke, However, he did find a record of a child born soon after their arrival – it seems they ran away from London after Francis became pregnant. Local newspapers revealed their life in New York, where Joseph gained a prestigious role as a Superintendant of Horticulture, but got into a dispute with his employers and left after just a few months.

TOP TIP
Search between censuses
City or trade directories are detailed lists of a locality's inhabitants and/or tradespeople. They can help you pinpoint your forebears in the years between census returns. Our huge City and County Directories collection has records from the 1600s right up to the 1900s. 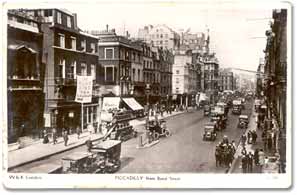 So, the young family were on the move again – this time to Atlanta. It was here Joseph really made his name, designing a luxurious garden suburb named Inman Park, which attracted the great and the good. Controversy soon reared its head again, though - an Atlanta city directory listed Francis living in poverty as a widow, after Joseph had 'died' in the 1880s. Again, passenger lists were the key to the truth, showing the errant dad travelling alone between Liverpool and New York as late as 1903. He had faked his own death, and abandoned a second family.

At this stage, Bruce finally met up with Linda Monday, and was amazed to find a whole host of Joseph's other American descendants. However, this wasn't the end of the story. Bruce discovered an obituary in a New York newspaper, stating that his devious forebear had died alone in a hotel aged 64, leaving just $400. The gameshow icon visited his grave, and found it unmarked in a cemetery's charity section.

Saddened and emotional at this heartbreaking end to a thrilling if disreputable existence, Bruce commissioned a gravestone to commemorate his ancestor's life and work.

TOP TIP
Read all about it
Even if you don't think your ancestors did anything particularly newsworthy, it's worth checking newspapers for birth, marriage or death announcements, or even detailed obituaries. We have a range of newspaper collections, including searchable copies of The Times and several local titles.