Rupert Penry-Jones set out to discover the truth behind a rumour of Indian blood in his family. He came tantalisingly close to proving this link, but it was the thrilling stories he uncovered along the way that proved truly revealing.

Rupert's adventure began with his maternal grandfather, William Thorne – commander of an Indian Army medical unit in World War II. William's unit records at The National Archives detailed the major role he played at the crucial Battle of Monte Cassino in Italy. He was responsible for treating over 1,500 casualties, and his work meant hundreds of lives were saved.

TOP TIP
Service records are usually the most revealing records of war heroes from any period. If members of your family served in World War I, try our two crucial collections, Service Records and Pension Records, 1914-1920. 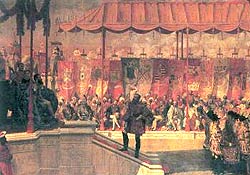 The military connection continued with the actor's 2x great-grandfather, Theophilus. A service record at the British Library showed the former gardener rose to become a Major in India during the height of the British Raj. He ran state camps organised to celebrate the British Empire, including the Dehli Durbar that marked a visit from King George V.

Theophilus' wife had even deeper roots in India. Her line led back to Thomas Johnstone, who fought for the East India Company during the Indian Mutiny of 1857. Rupert travelled to Allahabad in the north of the country to learn more.

TOP TIP
We have a number of resources to help you trace your colonial forebears. These include a complete register of the East India Company from 1844, and a directory covering the whole country in 1895.

What he found shocked him, as letters written by Thomas spoke of taking treasure from natives and burning villages "for sport", in revenge for the killing of European women and children in the Cawnpore Massacre.

Looking through Thomas' family, Rupert found his mother-in-law listed simply as "Susanna", with no surname. Intrigued by this, he visited her local Christian church to consult its parish registers. Her daughter's baptism record listed her as an "Indo Briton", showing she was of mixed race.

The final step in this journey was Susanna's own baptism entry, which described her mother Elizabeth as a "native woman". For a moment Rupert thought he had found his Indian blood – only to be told it simply meant she lived in the country. There the trail went cold – he had come within touching distance of achieving his aim, but he could go no further.

TOP TIP
Parish registers are the foundations of any research before 1837, as they provide details of earlier births, marriages and deaths. Check out our growing range of parish registers from around the country