Australian Jason Donovan had always felt a stronger attachment to the British ancestors on his father’s side of the family. However, he soon found his mother’s kin played a key role in the founding of his home nation.

Jason’s maternal grandmother left him a collection of family records and mementoes. A prominent figure in these was his grandmother Edith Lyons. He delved deeper, and found she had been a successful singer during the early years of Australia’s independence.

The Neighbours star used birth, marriage and death certificates to trace Eileen’s line back to Tasmania. Here, he found her grandfather Joseph’s name on a transportation register from 1842. His Jewish ancestor was convicted of handling stolen goods in England, and sentenced to ten years in the penal colony.

TOP TIP
During the 18th and 19th centuries, over 160,000 convicts were transported to Britain’s developing penal colonies in Australia. Find out if your family’s black sheep were among them in our comprehensive transportation registers. 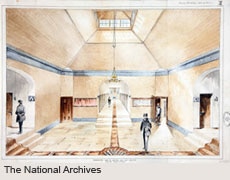 Joseph’s story did have a happy ending. He used his religious connections to leave the penitentiary, then raised enough money to bring his family to join him in Australia. His son was born in the country, and continued the family in his new home.

Jason then turned his attention to his maternal grandfather’s line. The Australian Society of Genealogists had a variety of certificates and other records, which allowed him to trace his roots back to a William Cox who was born in Dorset in 1764. Ominously, it seemed William also came to Australia on a convict ship.

TOP TIP
The largest and most detailed online resource for tracing your wayward forebears is our Criminal Registers, 1791-1892. These reveal the trial, conviction and sentencing of over half a million lawbreakers from all over the UK.


This time the truth was far more respectable. The registers showed William was captain of the ship Minerva – a soldier in charge of the crew and prisoners. Jason found his forebear was an early pioneer in the colony, and became a well-known property developer.

Fittingly, the pinnacle of William’s life came in the gigantic Blue Mountains near Sydney. He was asked to build the first road joining New South Wales with the unexplored plains across the rest of Australia. His own diary and letters written by the Governor revealed how he performed this hazardous task with incredible determination and ingenuity, and came to be a leading figure in the development of a new nation.

TOP TIP
We’ve recently added the largest online collection of Australian birth, marriage and death records, to help you trace all your ancestors down under. This includes records from each of the country’s states.

Alexander Armstrong:
Enjoy a right royal treat as the funnyman strides through a past full of castles and titles.
Find out more here

Jason Donovan:
Follow the soap star's mission to learn about a mother he hardly knew.
Find out more here